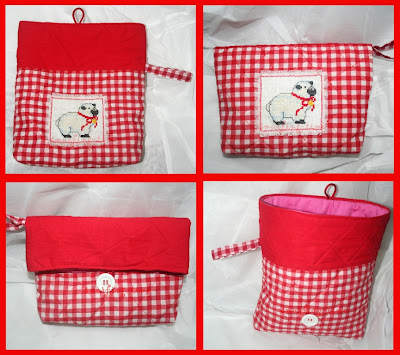 Another bunting flag...but this one for Baby Keya...my hubby's friend's daughter, she's around 6 months old and I've never seen her :(   But, I believe she's cute and beautiful like all Indian babies :)

First bunting flag I made was for baby Willy, a dear friend's handsome baby boy :)  I made a triangle shaped one for Willy.  Now as a change, I did a little bit experiments by changing the shape into curve one.  My gender thought kept on suggesting that triangle works for boys while curve will be look more girly heheh...

I chose pink fabric for sure, as all mommies will prefer pink for their little girl.  Oh yeah, I checked here that Keya means Asian Flower and it's an Indian origin name, a beautiful name for a beautiful girl :)  So, flower will be perfect as the applique that I put before the name and a butterfly in the end of the row.  This time, I decided to use bias tape to hold the name, well take a look!

The original idea was to make a fabric book with appliques to learn buttoning.  A dear friend of mine who's living in NZ told me to make one, years ago.  Then, I found it too meticulous for the project.  I don't think I have patience enough to make small dress with buttons, an applique of shoes for shoe lacing, and so on.

One idea is to make a useful stuff for kid age between 2 to 3-years-old and another idea is how to make the useful stuff can be a toy to play with at the same time.  Thinking, digging, and imagining!

While thinking what to make, I checked a book, Sew Darn Cute by Jenny Ryan, there's a simple square bear doll she designed.  It's very cute and so easy to make, you don't need a pattern to make it for sure ;)

Two ideas collided and here they are... two square bears with clothes that can be opened to learn buttoning.  The dark brown, is boy bear.  Your kid can learn opening and closing the velcro and sew snap buttons at the front side of the dress.  Ask the baby boy bear to turn and your kid can try to put the lace, soon he or she has to do that with their own shoes, right?  The light brown, is a baby girl square bear.   She's wearing pink cloth with two sew buttons to learn and zipper at her dress' back side. 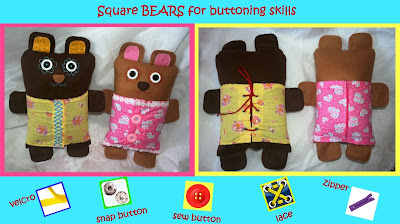 I did trial and error for this project, since the original square bear's dress supposed to be sewn attached to the body...but I think they ended nicely and cute :)  I gave them to a dear friend's daughter for her second birthday.  I hope she really enjoys learning while playing with them with an expectation she will able to dress and undress herself by three-years-old ;)
Posted by smurfing-time at 11:08 AM 5 comments:

I Can't Live Without Books

"I Can't Live Without Books!" .... Yes! It's the famous quote from Thomas Jefferson, one of the founding fathers and the third president of USA.

I was thinking to make a birthday gift for anyone who loves to read books, all kind of books, I would say.  Digging my creativity, I chose an owl as we all know this bird represents wisdom, art and scholarship...so an owl reading a book will be a cool idea with Thomas Jefferson's quote at the right side!  I drew the owl on a paper and made it as a pattern to cut the fabric.  A combination of blue and yellow fabric for the owl and quilting around it would be great.

Actually, I planned to make a pillow cover out of it...and it was a pillow cover just ready to have final stitching, but my husband protested, "I thought you gonna make a wall hanging art, stop stitching!"  Hurriedly, he took off a painting out of its frame and put the sewn owl on it...and voila! check it out!  It's now become an art! 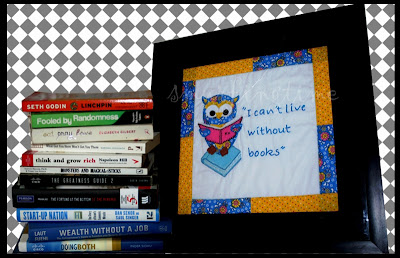 The eliminated painting is now kept for a while until we buy another frame for it :) anyway my hubby didn't really like it, it's an abstract and too abstract without any meaning on it :D   Well, now it's hanging there above my bookshelf, and I really have to make another one to be kept for a birthday gift later on ;)
Posted by smurfing-time at 7:20 AM 8 comments:

I got the One Yard Wonders (OYW) book, I can say this book is giving me cool ideas on what to do with one yard fabric only.  And I bought this book mainly because I want to have the simple pattern on dresses they've shared there.  For my first project, I chose Elodie the Elephant, since I love this animal so much and I love to make doll...

The instruction on how to make Elodie the Elephant is a little bit confusing, thus I decided to search on Google about the tutorial.  Thanks for Sarah Faix of Bit of Whimsy dolls, the Elodie's designer, she shared the tutorial on youtube.com and divided the tutorials into three parts, click here for part 1, part 2, and part 3.  You bet you'll find it so easy to sew this Elodie ;) 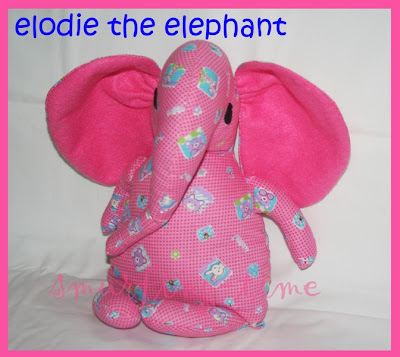 I was thinking to give the doll to my hubby's friend's daughter as a gift but rethinking when I found the stitching on the ears' sides were so tricky and I wasn't satisfied :(   So, just let me have this Elodie for myself at home :)  At least, if I have little guests they can play with it ;)
Posted by smurfing-time at 2:51 PM 5 comments: 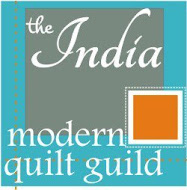 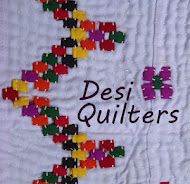